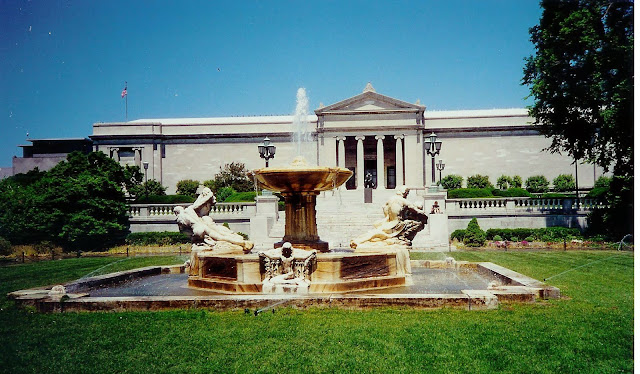 At this halfway point it is worth reflecting on a central problem that besets the museum in America today. How the democratic ethos in the U.S.A., the notion of “egalitarian democracy,” is squared with the fact that most of these art treasures are in the museum due to choices made by very wealthy individuals of the Old World upper-class who lived a life of aesthetic luxury, completely alien to those who worked as democratic citizens in the new America.”[1] Despite the nature of the democratic political system and the museum’s mission to make art accessible to all, these institutions preserve elite values, or objects that have clear associations with an elite culture. The task of any museum director is to widen access to the public whilist teaching them how to look at and appreciate very expensive art, but this involves the difficult task of reconciling democratic art education with the elitist origins of these works. There is also the problem of teaching the public how to look at art which involves attempts to popularize discernment in looking, i.e. connoisseurship through the museum and technology. It is obviously harder to avoid intimations of connoisseurship in spaces like the Isabella Stewart Gardner Museum and the Frick Collection, where under populated galleries inspire almost private contemplation of the work of art in highly elegant surroundings once inhabited by the likes of Berenson and co. As Phillipe de Montebello observes, the Frick is “a relatively small space with a disproportionate amount of consummate masterpieces.” [2]  However, in the larger museums like the Met and as we shall see, the Cleveland Museum of Art (CMA), connoisseurship is more difficult to incorporate within the mission of the museum, assuming that it figures there at all.

Teaching the public how to look features low down on a list of priorities, of which more pressing are how to enlarge visitor numbers, not only as a source of revenue but also as a marker of how museums are fulfilling their role of making elitist culture available to the masses. This is what drives the mammoth re-building programmes and architectural schemes that seem to be de rigeur for museums nowadays. As museums do not know effectively how to expand their audiences for visual art, they build pleasant public spaces, formulate projects involving major curatorial re-positionings, setting out the chessboard afresh. Those who watch and understand these games whisper nostalgically about an era when large museum restaurants, cafeterias and blockbuster exhibitions did not exist.[3]  That era is long over and there is no possibility of returning to it as American museums like Cleveland complete huge refurbishment projects, almost physical affirmations of the paradigm shift that has occurred in the public museum. Museums in America, and indeed throughout the world, for better or worse, are under immense pressure to change with the times. The Cleveland Museum of Art is one of the many stories told of how museums have responded to the pressures of modern times, initially by resisting the encroaching industrial world with uncompromising conservative directors like Sherman Lee, and later by adapting to the new climate of public accountability and financial pressure that cultural organizations find themselves in these days. 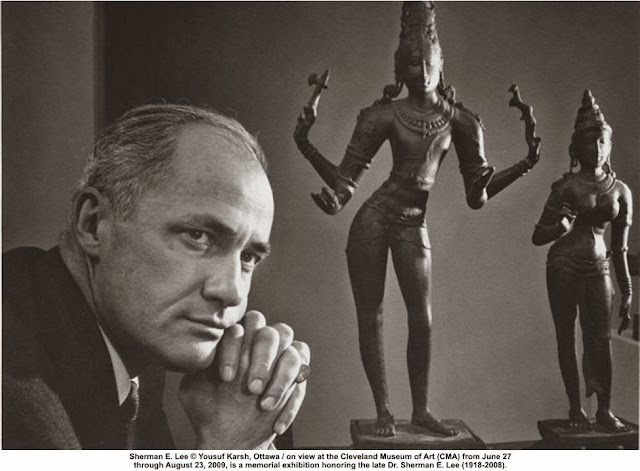 The CMA was established in 1913 and opened its doors to the public in 1916. Its most famous director is Sherman E. Lee (1918-2008, dir, 1958-1983) who guided the museum through a quarter of a century of its development.[4] An expert in Asian art, and a connoisseur with a strong aesthetic sense, Lee was a conscientious scholar who produced many books, unusual for a museum director in those days, let alone now.[5]   Lee inherited an enviable situation in 1958 since the iron-ore magnate and philanthropist Leonard C. Hanna had left $30 million (about $250 m today) to the museum. Lee used this capital to pursue old masters and to build an outstanding Asian collection. He bought works by Zurbaran and El Greco as well as J.L. David’s Cupid and Psyche,  F. E. Church’s Twilight in the Wilderness and Poussin’s canonical masterpiece, the Holy Family on the Steps in 1981, originally owned by Therese Bertin-Mourot, the niece of Paul Jamot, a curator at the Louvre. However, Blunt cast doubts on its authenticity whilst Lee was “100% convinced” that it was an original. Blunt’s opinion carried weight with the French, and Pierre Rosenberg, then director of the Louvre, told Lee that it wasn’t original. To cut a long story short, the painting came to the States which got Lee in trouble because three years after he brought the Poussin to America, the French government issued an international arrest warrant accusing him of obtaining the painting without an export license. Subsequently the French were mollified when CMA agreed to lend the painting to the Louvre on future request. During a long and illustrious career Lee was no stranger to controversy. Apart from the Poussin affair, there was the purchase of a “Grunewald” for $20 million which turned out to date from the 1970s, though the museum got its money back. Perhaps the most provocative incident was Lee’s decision to remount a damaged statue of Rodin’s Thinker after it had been disfigured by a bomb in 1970, a presumed act against the Vietnam War, and subsequently a symbol of art’s vulnerability. Though an ardent exponent of art education, Lee was unwilling to bow to prevailing fashion as he saw the CMA as a bastion of high culture, less of a place of entertainment and definitely a “blockbuster” free zone. This resulted in one critic calling Lee’s museum “the only really aristocratic museum in America. “ This patrician attitude could not prevail today because museums have to be commercially viable, attract the public, and they cannot simply be “a place for looking at works of art” much to the chagrin of art historians, aesthetes and connoisseurs who believe that is precisely what museums are for!”[6]
Brief Analysis of European Painting within the CMA.

Things improve significantly when we arrive in the mannerist and early baroque period as we encounter fine works by El Greco (Holy Family and Christ on the Cross). Heading into the seventeenth- century we have stunning examples of works by two diametrically opposed artists: Caravaggio’s Crucifixion of St Andrew and Poussin’s Holy Family on the Steps where, in the words of Richard Verdi, “logic and reason themselves acquire the fascination of the unattainable.”[7] The Northern Caravaggeschi are extremely well represented in this museum with impressive works such as  Honthorst’s Samson and Delilah, and two versions of the Denial of St Peter by Wtewael  and Georges De La Tour, a superb example of his night-painting. To this realist group, we could add Zurbaran’s sombre Christ and the Virgin in the House of Nazareth which juxtaposes in an intriguing way Sevillian realism with the flamboyance of the high baroque. There are examples of French classical works hung near Poussin like La Hyre’s pastoral mediation on the end of the Fronde,  Justice and Peace and Vouet’s Penitent Magdalene, which seamlessly blends Caravaggio with French elegance . Neo-classical paintings like J.L. David’s Cupid and Pysche fall into the “Modern European Group” and from later periods and styles we can add such diverse works as Berthe Morisot’s Reading, Picasso’s La Vie,(the endpoint of modern art in Lee’s time) and Salvador Dali’s enigmatic The Dream. From copious holdings of American art including 488 paintings, two of the best selections are Church’s fusion of weather and politics, Twilight in the Wilderness, and from the gritty realist school, George Bellow’s pugilistic Stag at Sharkey’s which observes “lumpen Darwinism” in modernist America.[8]


Consolidation and Change: Moving into the Future. 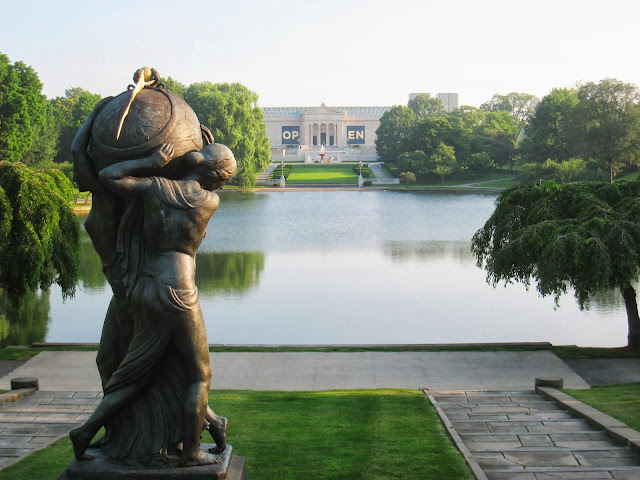 As it nears the end of its massive refurbishment project, CMA is going through great changes. During David Franklin’s tenure the museum handled change well, opening the new Gallery One, raising $100 million and saving an important exhibition. However, CMA was not expecting Franklin to tender his resignation suddenly in October for undisclosed reasons, which comes at a crucial time in the museums expansion.[9]  The loss of Franklin is clearly a blow since he had interesting plans for the museum and has a reputation as a fine curator. As he wrote in the museum’s annual report from 2009-10, he was aiming for a “contemplating and moving experience,” negotiating between the idea of the museum as the space of intense looking and the idea of it as a participant in a grander narrative of progress moving forward into the future.[10] The museum can achieve this by remaining true to the vision of its founders by keeping general admission free to the public, and with a $600 million endowment it is one of the wealthiest museums in America able to build on its acquisitions. The permanent collection of 43,000 works of art has been returned to the refurbished galleries and the challenge of displaying this diverse collection to the public continues. From reading the report on acquisitions it is obvious that the museum is adding new art to the collection, especially contemporary art. Unlike Lee, the museum has not encountered problems in pursuing contemporary art and has increased its holdings which now includes specimens by Warhol and Pollock amongst others. However, it is clear that renaissance art is a weak area of the museum with many attributed and studio works, so this area is crying out for enhancement. One hopes that there may be attempts made to address this deficiency, especially as old master art though expensive isn’t as costly as contemporary art. Though this museum is broadly strong across its many collections, perhaps the most impressive are its Asian and American collections, and the superlative collection of baroque old masters, one of the best in the country.


1)      View of the Cleveland Museum of Art from Euclid Avenue.